By 2050, the population of adolescents and young people aged 15–24 is expected to increase by 10 per cent globally and to more than double in sub-Saharan Africa. The relationship between this demographic change and the course of the HIV epidemic among young people from 2010 to 2050 was the subject of an analysis published in Global Health Action (Sept. 2019).

Aleya Khalifa and Chibwe Lwamba from UNICEF’s Division of Data, Analysis, Planning and Monitoring, together with co-authors from UNAIDS and Avenir Health, noted a key message for policymakers and programme planners: The link between population growth among young people and the prevalence of HIV in that age group is not a simple 1:1. The epidemic will continue to be influenced by the intensity of the HIV response in the country as well as general trends in the wider population.

Within this age group, the analysis covered trends by sex and region with an aim of understanding the epidemic from an equity lens. The projections signal a shift in the geographic distribution of the epidemic burden, with the number of new infections among adolescents and young people declining by 84 per cent in Eastern and Southern Africa and only 35 per cent in West and Central Africa by 2050 (see Figure 1). “This is being called a globalization of the epidemic,” Khalifa added, noting that this geographic change highlights a need to redistribute the focus of the HIV response to all regions to ensure none are left behind from the trajectory of progress.

Epidemic modelling approaches like this one can help decision makers get a more complete picture of HIV and the impact of country responses by supplementing data from surveys, which are expensive to conduct and thus limited in frequency, and programme data, which are often limited in scope. The modelling used in the demographic projections analysis relied on country-produced HIV estimates, assumptions and projections calculated first at the national level, then compared with baseline data from 2010.

“Modelling is not a one-off, independent approach,” Lwamba emphasized when describing the methodology. “Epidemic models are built over time and adjusted based on evidence.” The foundational work is led by a global group, the UNAIDS Reference Group on Estimates, Modelling and Projections, convened by UNAIDS with WHO and UNICEF participation. Each year, the group conducts a rigorous data validation in close collaboration with country partners through a query system examining each indicator.

UNICEF focuses its data validation and quality assurance efforts on child-related parameters and indicators, including testing at antenatal clinics, early infant diagnosis and paediatric antiretroviral treatment (ART) coverage, among others. In particular, UNICEF repackages country data and UNAIDS estimates by five-year age groups that further describe the HIV epidemic and the response among different age bands within the paediatric population (See HIV estimates for children dashboard). 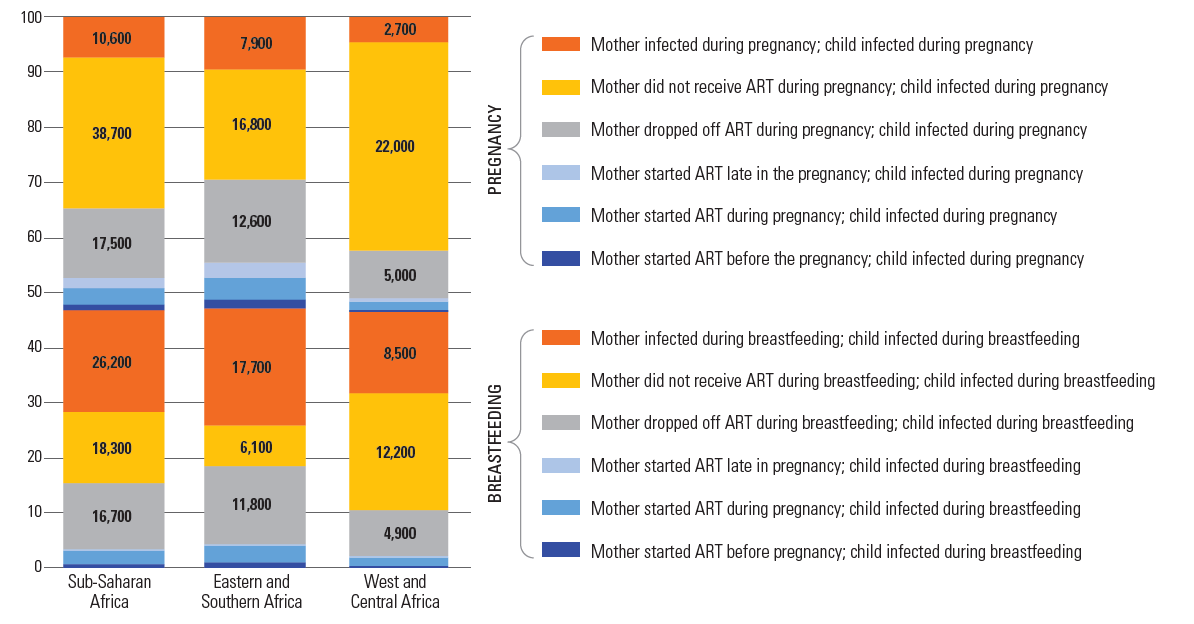 Increasingly, global partners in the HIV response are calling for data-driven decision making and new sources of data. Lwamba and Khalifa stressed the importance of prioritizing systems strengthening for routine data collection to support continuous monitoring and decision making in countries. “Our mindset has to change from thinking about data for reporting to [thinking about] data for use throughout programming,” they added. “Every time we invest in programmes, we must be investing in the data systems that inform that programme.”

As data are used with more breadth and depth throughout the life course of a programme, data systems and maturity will also improve to satisfy the demand for better quality data.

A current approach expanding to many high-prevalence countries or regions is the stacked bar analysis, which allows for comparisons of both the number of new HIV infections and the sources of the new infections in that country or region (see Figure 2).

This analysis is especially useful in showing how the epidemic varies within a country and can help countries adapt programmes to individual contexts. In Zambia, for example, stacked bar analyses for 10 provinces showed wide variation and highlighted one province as having higher incident infections among the paediatric population; the analyses were then used to inform programming.

This expansion of stacked bar analyses in sub-Saharan Africa has encouraged countries in the Latin America and Caribbean region to re-examine data sources, and in doing so, some countries have identified a need to strengthen the underlying data to be able to conduct further analysis. UNICEF continues to support systems strengthening for routine data collection and capacity-building for real-time data analysis and use. In the near future, UNICEF will work with PAHO and UNAIDS in the Latin America and Caribbean region to strengthen data systems used to measure key antenatal care and PMTCT indicators for countries working to achieve validation of the elimination of mother-to child transmission (EMTCT) of HIV and syphilis.